How To Build a Football (Soccer) Fantasy Mobile App?

Investing in fantasy football/Soccer mobile app is like having a gold mine. The genuine fan following itself drives the popularity of the fantasy app that translates into a successful business model that goes on for the ages.

Football, also known as Soccer, is the most popular sport in the world connecting 4 billion die-hard fans from all around the globe. Their love, passion, and dedication towards the sport make football less like a sport and more like a religion. Hence, the popularity and loyalty must never be part of the question when it comes to football.

Football has a fan following and fantasy sport enhances the sport experience of the fans. The possibilities are unlimited. In this article, we will try to cover everything you want to know about fantasy soccer app development from the business model to the development process and from features to revenue model with the app’s development cost.

But before that, let’s get a closer look at the market sizes of both fantasy sport and football.

According to a report by the Fantasy Sports Trade Association (FSTA) in 2017, there were 59.3 million people playing fantasy sport in only USA and Canada. However, football is a world-famous sport and its popularity exponentially increasing beyond the borders. It is receiving love from the highest populated countries on the earth, India, and China. The Financial Outlook of Fantasy Football

On the other hand, the market size of fantasy sport is increasing year by year with a CAGR of 19%. It is predicted that if it continues the fantasy sport is likely to cross the line of $8 billion by the year 2022. Do keep it in mind that it is about only one league, UEFA Champions League, La Liga, Bundesliga, and other major leagues are not the part of shown statistics. But this leaves us to wonder how huge fantasy football market is!

We know that football is probably the largest sports market in the world. But how large is it? Let’s take a look at some facts and figures.

25.5 billion Euros! Yes, this was the revenue of the European Football in the season of 2016-2017 by Statista. To give you a contrast, in the same season the NFL earned about $14.2 billion.  It is clear that football has come a long way. Not to mention the 4 billion fans worldwide and counting. This magical sport exceeds expectations in every aspect of demographics. Because brand promotions and advertisement and merchandise are the areas that affect the overall revenue and it is controlled solely by the audience. Football is simply amazing. 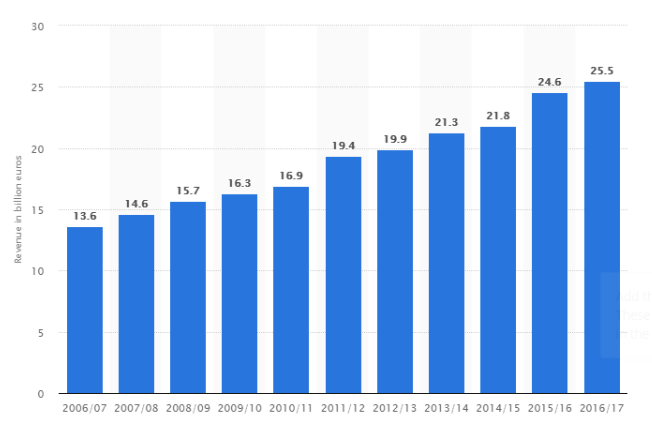 A sport like football is a great atmosphere for businesses like fantasy sport to thrive. For a successful fantasy football mobile app, you need an app that enhances the sport experience of the fans and makes them feel more connected to the game and not to forget the rewards.

It takes a little bit of time to get used to fantasy soccer games. All it requires is a team. A user is given 100 million euros to make a squad. A squad consists of 15 players (2 Goalkeepers, 3 Forwards, 5 Defenders, and 5 Midfielders). From the squad of 15 players, the user needs to select 11 players to make a team, which can enter the game. The team must be formed before the Gameweek deadline. When the match starts, the user can observe the performance of her team throughout the match. After the match finishes, the points are distributed to the players of the user’s players according to the real performance of the players in the match.

These games are played in certain leagues. There are some leagues, which are free, and to enter premium leagues, there are certain charges a user has to pay to win premium prizes. A user can also create her own fantasy football league as well and set the number of users who can enter and play.

It is as if the user is the manager and she is introducing her team to the championship. Hence, the actual football match gets even more personal. The user can also play fantasy football with her friends and other users of the world as well. Now let’s get to the development of the fantasy football/soccer mobile app.

How to develop a fantasy football mobile app?

For a winning football mobile app, you need an experienced fantasy soccer app development company. There are multiple stages and important decisions involved in the development of fantasy football mobile app. It all starts with getting together a team of dedicated and experienced fantasy football app developers who can understand your vision and share their ideas as well to develop the app that sells itself. Since it all starts with an idea, the next step is to develop several prototypes, choosing the best one, refining, and polishing it with some tweaks until it becomes the result that you had anticipated.

But for a user, it doesn’t matter how much time did it take to build the app or how much efforts were put into its development. In the end, it is a stack of features that the app offers matters. These features are not the same for the users and the administrators. Let’s talk about these features in detail. 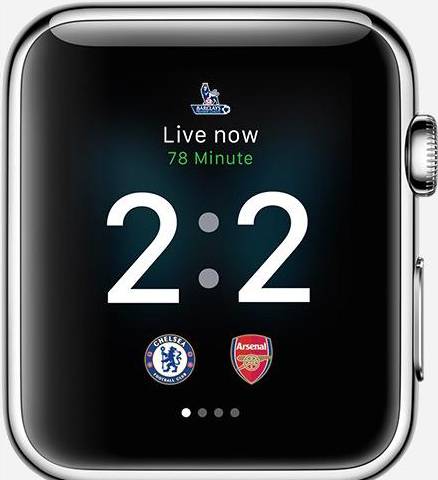 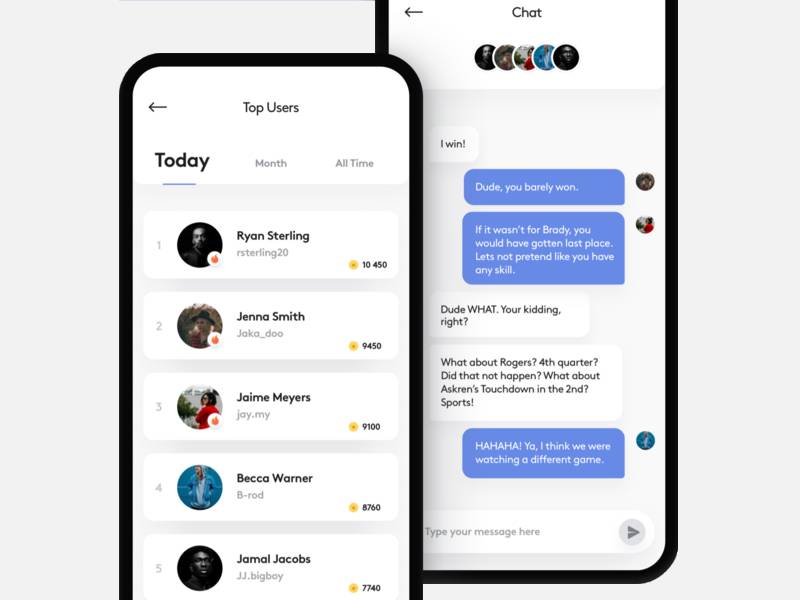 While the users enjoy the exciting features of a fantasy football app, admins take care of all the essentials and background activities to make sure, everything works fine. These features are smart and intuitive and help in a great magnitude. Here are some of them:

Development of a high-end fantasy football app that makes a room in the daily life of football fans is not an overnight task nor it can be built by a single person. It takes a team of a dedicated and experienced team of fantasy football app developers, designers, UI/UX designers and many more. Such team knows the user behavior. They know what drives the audience and what engages them. Here are some essential members of such teams, For a sport like a football, the money is flowing in the market like a flood. But how can someone capture this flood? Well, that’s why we are talking about some of the possible ways from which investors can make and increase revenue by fantasy football mobile app. Let’s talk about these ways and means in detail.

By far the largest chunk of the revenue comes from the entry fees. According to research, in the first quarter of 2018, fantasy sports collected $750 million by only entry fees in the US region. It is no brainer that the market of football is much larger and filled opportunities than other sports. These entry fees are paid by the users to enter and play in private leagues in order to win big rewards.

It is most famous among all freemium apps. Though the fantasy football app is free to download and free to use but no user wants to limit his/her ability of free gaming. Hence, in-app purchases are there so that users can buy reward coins to unlock special features and abilities to maximize the fantasy football experience.

According to a survey in the US, by the year 2020, iPhone users are likely to spend around $88 on mobile app purchases. Hence, in-app purchases unlock many doors for revenue collection.

Advertisement will never get old in attracting users to use your fantasy football app and increase the revenue. In addition, showing niche-based ads within the app from various vendors also increases the overall revenue from the app.

For a fan, the expression of love for his/her favorite team is very important and personal. For people, merchandise is the number one way of showing their love for their teams. And the market for merchandise is as ridiculous as it can be. In the year 2015, the global revenue, which was accumulated by sport merchandising, was $20.07 billion. The market is as big as it can be. Hence, having an e-commerce section in the fantasy football app is going to add some extra numbers in the revenue.

How Much Does It Cost to Build a Fantasy Football Mobile App?

The direct answer is not possible as the cost is relative. There are various factors that play vital roles in affecting the development cost of fantasy football mobile app. Some of them are, number of features, number of platforms (iOS, Android and Web) for which the app is going to be built, and the region, where the app is going to be built, also affects the cost of development drastically. However, working with a prominent fantasy soccer app development company. may increase the cost a little bit but it will ensure to be a great application that possesses the ability to perform fabulously among the audience.

Even having so many variable factors, an average fantasy football app having essential features can cost somewhere between $35000 to $50000. However, having additional features and functionalities may increase the price.