It is certain that the market and popularity of Fantasy Hockey Mobile App is destined to grow in an ascending staircase manner. I understand this statement may seem a little vague to you. But before you question the credibility of the statement. Here are some facts; according to Statista, the total league revenue of NHL was $4.86 billion in the 2017-2018 season, which is almost double of what it made in the season of 2006-2007. Take a look at the graph of the revenue made by NHL and you will see how hockey is making its way all the way up every season. 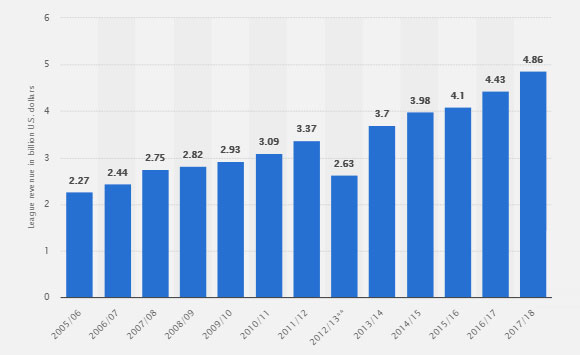 Hockey is a global sport. It is famous in those countries that influence the rest of the world. You guessed it right; it is famous in, United States, Canada, Europe, and Russia. Apart from these countries, the popularity of hockey is widespread in Belarus, Croatia, the Czech Republic, Finland, Sweden, and Switzerland. National Hockey League (NHL) of the United States is the largest and most popular men’s ice hockey league in the world. On the other hand, the Kontinental Hockey League (KHL) is the most famous ice hockey league in Russia and Europe. Just to give you a look at the bigger picture, there are ice hockey federations in around 76 countries.

Surprisingly, the multi-billion-dollar revenue we talked about was accumulated by just NHL alone. In addition, ice hockey is also a part of the Winter Olympics. Therefore, the popularity of hockey is unquestionable and opportunities in the market are unlimited. Therefore, it is worth developing a fantasy hockey mobile app for all those fans around the world to give them a whole new way of experience hockey.

Observe that we are talking about just the USA and Canada market here. Two huge markets (Europe and Russia) are still excluded from the statistics. Hence, it takes no effort to figure out that fantasy hockey mobile app is a worthy investment. Why Should You Invest in Fantasy Hockey Mobile App?

The market of fantasy hockey is in the favor and so is the audience. There are several apps that are dominating the market right now like DraftKings, FanDuel, ESPN, and Yahoo. In the first quarter of 2018, these apps managed to bag $750 million from the fantasy sports market. These facts are enough to show that there are some working business models in the area of fantasy hockey mobile app and they are making millions every month. Hence, it is a lucrative opportunity to enter the market with a fantasy hockey mobile app that is perfect from every aspect with cutting-edge features then you can be assured that the revenue will flow towards you.

Not to mention that to capture the broader audience, one must respect the choices of every user. Therefore, fantasy hockey applications must be built for all platforms (Android, iOS, Web, and wearables).

The cross-platform availability surely paves the path for user attraction but it is the collection of exciting features that turns the tables. Therefore, fantasy hockey must have the features that not only enhance the user experience but also make the app stand out from the rest. Let’s shed some light on some common features that are integral parts of a fantasy hockey application. Features for the Users:

The users are the center of an application ecosystem. Therefore, the features for users are very carefully chosen. The point is to provide only necessary and simple app features that enhance the hockey match experience not make it complicated. Here are some features, which are essential and as simple as they can be while having maximum values.

When a new user signs up to access the fantasy hockey app, this welcome screen shows up at first. Usually, this screen contains all relevant news and updates of a hockey match, teams, and drafting. It also has all shortcuts to every menu of the app.

A fantasy hockey app is social media in itself. A user can connect with friends and make groups. Therefore, a user profile is necessary; where user can set his/her username, check all the statistics of total games played and earned reward points, etc.

Fantasy hockey is a skill-based game. It takes skills to draft a winning team. The knowledge and strategy for drafting a hockey team come from having a deeper knowledge of hockey players. This feature helps users to know more about career, performance and other details of the player. 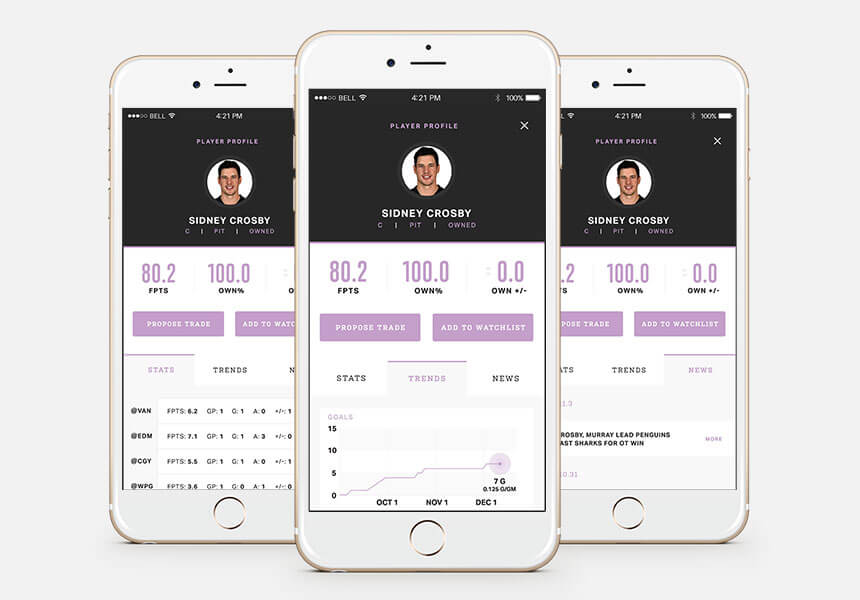 The joining league feature allows users to join or enter various leagues and draft teams. Users can join leagues of their friends or other public or private leagues too.

Fantasy hockey app user likes to do things their own way. By creating their own fantasy hockey league, they organize a game the way they want. It brings a personalized touch to the fantasy.

This feature allows users to draft their own team after entering the leagues. The additional features like providing player prediction while drafting team also help users to draft a team for maximized winning chances.

Not just player information but hockey news and updates are also necessary to make winning strategies as they help in forming a better team.

If a user cannot watch the live match then this live scoreboard feature helps the user to keep an eye on the hockey team score within the fantasy hockey app. Reward points/credits/coins are the inner currency of the fantasy hockey app. This currency is used to purchase in-app items and they can be converted into real money. The user can win these points by winning in leagues or referring the app to friends and family members.

The user is the manager of the team. Therefore, this feature of fantasy hockey app allows users to manage his/her team and make necessary modifications as well.

For a seamless and convenient transaction, e-Wallet integration within the fantasy hockey application is a must-have option. 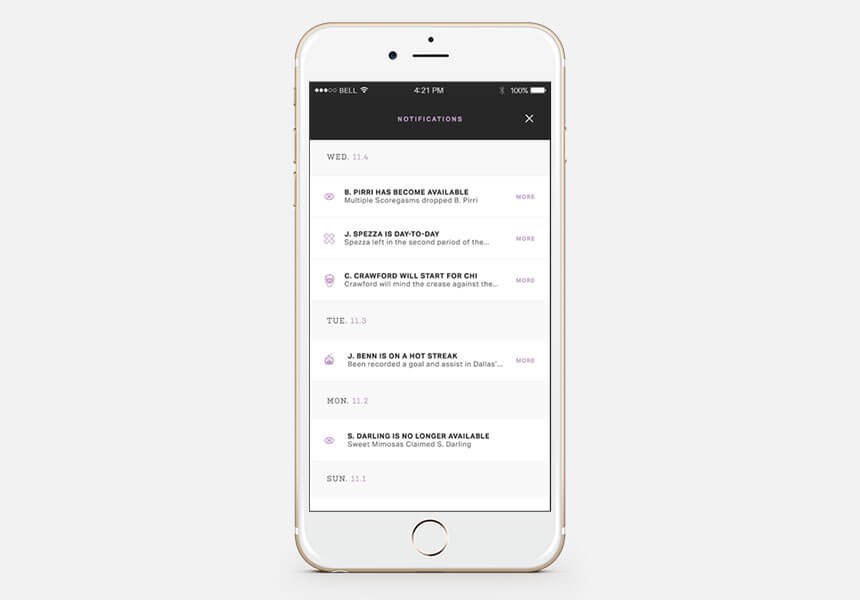 While having so much going on the user end it gets challenging to manage everything. In order to keep things running flawlessly some smart and intuitive features for admins can help them to keep track of every activity on the app.

These dashboards are categorized according to their niche. The admin can select the particular dashboard and all relevant information will be in front of him/her.

All the income and outcome related information is here. This feature also has some smart sorting options that help admins to get specific financial data of the fantasy hockey app.

It is one of the powerful features that admin have. This feature allows admins to manage Fantasy Hockey app’s overall user base. They can also add, remove, and ban users from the application.

There are various leagues on the fantasy hockey app at a time. This feature makes sure that the admins reach out to every league and make sure everything is running fine and there is no rule and policy violation whatsoever.

This feature enables admins to manage, assign and distribute reward or prize to the winners of the leagues.

CRM is a bridge between customer and client. With the help of an intuitive CRM, admin can manage feedbacks, email marketing, push notifications and many more actions that enhance the support system of the app.

Bank transactions are sensitive tasks and admin must have control over every transaction made by users. The transactions made from app to bank require admins personal attention and only after approval of admin, these transactions can be made.

So these are the crucial features that every user will celebrate after using. Of course, there are many more features that can make a fantasy sports app addictive.

All right, so far we have covered market, money, audience, and features of fantasy hockey application. Now it is time to talk about what you need to build a fantasy hockey app that rocks the application marketplace. The answer is a prominent team from the best fantasy mobile sport mobile app development company. As mentioned before, $750 million was the revenue of top fantasy sports apps in the first quarter of 2018. And this made possible by only the entry fees. It is obvious that the users are willing to pay for the entry fees if there is a big prize to win. The magnitude of the prize amount determines the number of attracted fantasy hockey app users. 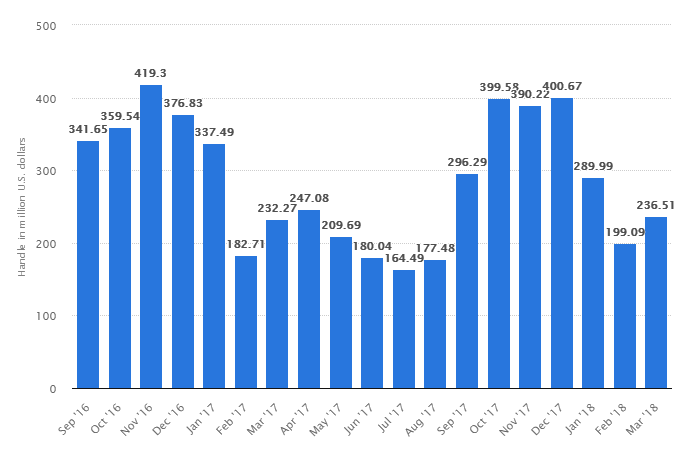 A survey held in the USA found out that by the year 2020, average iPhone users would pay $88 annually. This prediction is affirmative about increasing per capita expenditure on smartphone apps and their in-app features. The in-app features and items are there to enhance the fantasy hockey experience for the users and the fans can easily spend a couple of dollars on special features to win in the fantasy hockey league. Hold your seats, because the Global sports merchandise market is as big as $25 billion. And I don’t think we need these stats to comprehend the dedication and passion of hockey fans for official merchandise of their favorite team. Therefore, having a dedicate e-Commerce portal within the fantasy hockey app will add some extra numbers in the revenue.

An owner of a fantasy hockey app can promote his/her application among the sports fan to get brand awareness and increased user base, which further translates into more revenue. In addition, showing in-app advertisement of 3rd party apps also adds extra juice to the resultant revenue. How much does it cost to build a fantasy hockey app?

However, if we talk about a fantasy hockey app with all essential features, it may cost from $35,000 to $50,000. It all depends on the technology and region of app development.