Reasons Why You Should Choose Node JS? Features, Pros & Cons

JavaScript has single-handedly transformed the web development paradigm. It is unarguably the widely used and most popular front-end programming language in the world, even after several decades of its launch. It is used as a client-side development tool, and it has also proved its worth while crafting cross-development platforms for web development.

JavaScript has also got enormous popularity due to its use-cases in several other trendy web-development platforms such as Angular, React Native, Appcelerator, Titanium, Phone Gap, Native Script, Apache, etc.

Interestingly, the application of JavaScript has been expanded in other areas as well, and gradually it has been utilized as server-side programming framework for building backend components.

Node.js has arrived on the scene as a dominant player, which is reshaping the way we are developing high-performing and robust application backends.

Have you ever pondered why Node.js has become a preferred choice for developers across all geographies when it comes to building web applications?

If yes, then believe us, you are at the right place. In this article, we will help you explore the pros and cons of Node.js and walk you through various other aspects that make it the right choice for building scaled enterprise applications and adding intended value to your web development projects. 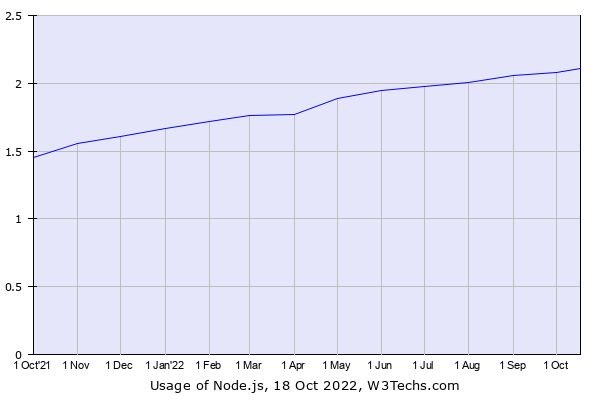 It offers event-driven and asynchronous I/O APIs to the developers. Node.js is capable of interpreting JavaScript code through Google’s famous V8 JavaScript engine.

It usually functions on a single-threaded event loop to ensure all executions are non-blocking. Let’s explore some important features and major pros and cons of using Node.js as server-side programming. 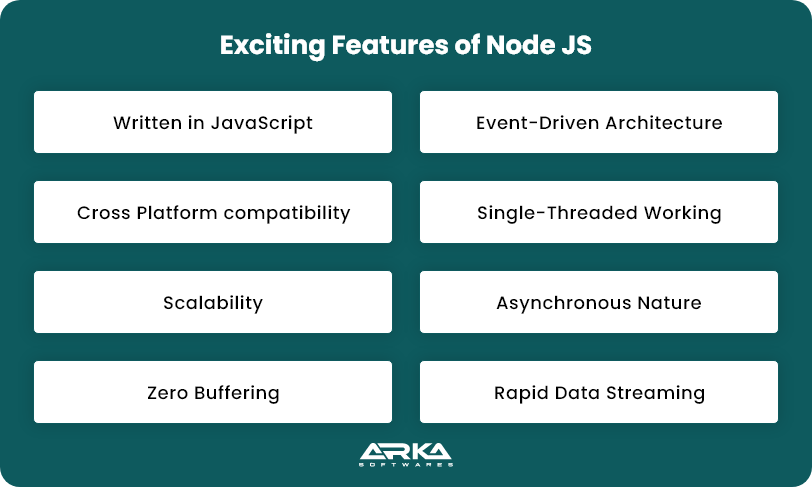 It is written in JavaScript, which is among the most popular and widely used programming languages in the world. It makes Node.js very easy to learn and understand for developers and even newbies.

The developers can use JavaScript and Node.js for front-end and back-end development respectively to make full use of JavaScript capabilities for your projects.

Node.js offers event-driven architecture, where once a specific event is completed then an event handler or callback function is executed.

This callback function needs minimum computing resources and memory at the severed, which makes the Node.js applications fast and lightweight.

Node.js could be used on numerous platforms and systems such as macOS, Linux, Windows, or even mobile platforms with ease. Node.js offers a self-reliant and reliable environment with the usage of correct packaging.

All requests in Node.js are single-threads and collected via the event loop. This ensures every code is executed in a single thread and all tasks right from receiving the request to the completion and sending it back to the clients are performed within the same thread. It prevents reloading and decreases content switching efforts.

Most app owners and developers require apps that are highly robust and scalable. Node.js can process concurrent client requests efficiently while managing the active CPU cores. This feature makes it a preferred choice to build scalable and customizable applications.

This feature allows Node.js to offer a better user experience and faster response time. The asynchronous nature of Node.js ensures that servers never need to wait for the data from an application programming interface. It also allows the execution of non-blocking I/O operations with ease.

Node.js functions with data streams that are indeed data chunks, that ensure almost no data buffering when Node.js is used. The apps developed with Node.js hardly buffer any data, instead these apps simply output the data in the form of chunks.

Node.js uses the V8 JavaScript runtime environment, which is also used by the Chrome browser. It accelerated the speed of Node.js and ensure data is streamed rapidly for a web application.

Node.js has been a popular choice to build solutions for industries such as healthcare, IT, logistics, entertainment, and many more. Let’s explore some of its irresistible advantages: Used as a Single Programming Language

The developers don’t need to use a separate server-side programming language, which makes the web application deployment slightly easier and seamless as most modern web browsers completely support JavaScript.

As we know that Node.js can easily interpret the JS (JavaScript) code using Google’s efficient V8 JavaScript engine. The V8 engine compiles the JS code into the machine code directly.

This makes it faster and easier for developers to execute the code effectively. The overall speed of code execution is very much improved by the usage of the runtime environment, which seamlessly supports the non-blocking Input/output operations.

Leverage the benefits of Full-stack JavaScript

Node.js is considered a full-stack JavaScript solution that serves both client-side and server-side apps. Therefore, you don’t need to hire separate developers for your front-end and back-end development requirements. It saves both your valuable time and money while reducing the time to market for your application.

The Advantage of Caching

Node.js is an open-source runtime environment, which offers the feature of caching single modules. If any request comes for the initial module, then it gets cached into the app memory.

The developers are not required to re-examine and re-execute the code as caching feature enables the apps to load the webpages fastly and respond to the end-users swiftly.

Node.js offers an ability of non-blocking I/O systems, it helps the application to process multiple requests simultaneously. This capability of Node.js makes it better and more efficient than its contemporaries such as Python or Ruby. It ensures all the incoming requests get in sequence and executed systematically and quickly.

It is exceedingly extensible

Node.js is exceedingly extensible, which means it allows seamless customization and allows developers to extend it further to meet their project requirements. The developers can also use JSON to exchange the data between the client and the web server. It also allows the usage of built-in APIs for the development of TCP, DNS, HTTP, etc. servers.

Node.js comes with its own set of disadvantages, which sometimes pose challenges for the developers and application owners. Let’s explore a few of the most critical disadvantages of Node.js here: 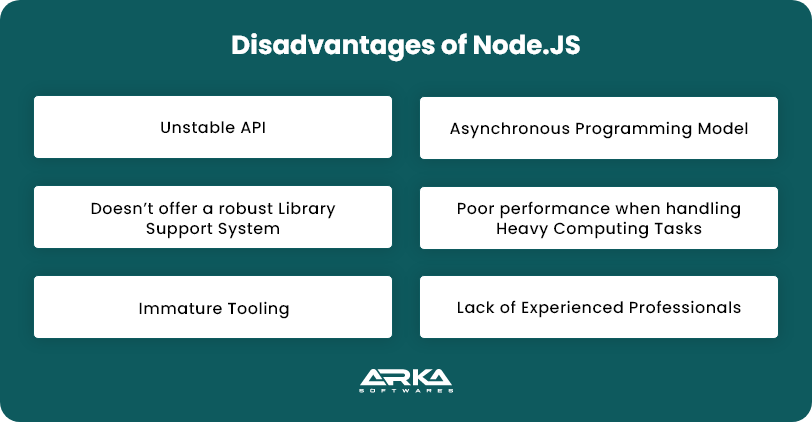 This is one of the most common disadvantages of Node.js that developers encounter. The Node.js APIs are quite unstable and keep on altering at regular intervals. Most of the time the APIs come with numerous backward-incompatible updates.

It forces the developers to make adequate changes in the code-bases to prevent compatibility issues with the recent edition of the Node.js API.

If you are planning to develop scalable applications, then you have to effectively adopt the asynchronous programming model.

In the asynchronous programming model, most of the time the codes become clumsy and unmanageable, which forces developers to use nested calls.

JavaScript lacks a strong library system if we compare it with other contemporary programming languages. This forces developers to leverage the common or 3rd party libraries to execute tasks such as image processing, XML parsing, Object-Relational Mapping (ORM), and handling of database operations.

This makes it tough for the developers to implement various common tasks using Node.js.

Although Node.js is an event-driven and single-threaded platform, it falls short when it comes to executing the heavy CPU-based computing task, for the same reason.

When Node.js gets a heavy CPU-driven task in the event loop, it uses all its CPU and other resources to process it as quickly as possible. This tendency led to the deceleration of the event loop, which further degrades the application’s performance and interface.

The Node.js core modules could be considered as mature and they are very much stable, but most of the other tools available in the NPM registry are either not well documented or poor in overall quality. The registry itself is not well structured to display the tools based on their quality and rating.

Hence it may be slightly cumbersome to find the best solution for your project requirements, until and unless you are aware of what to look for.

Contrary to the common belief of commonality among all JavaScript developers, Node.js developers are equipped with a different set of skills and abilities. It is slightly difficult to master JavaScript-based server-side programming, as it takes lots of effort and experience in backend development.

Due to this steep learning curve, the number of Node.js developers is significantly lower than other JavaScript professionals, but they are indeed in high demand.

When Should You Use Node.js?

Node.js is known for providing exceptional application performance and a robust backend. Let’s walk through some real-world use cases where you can use Node.js for your web and application development requirements.

Instant messaging, chatting, and real-time communication is a big use case for Node.js. you can leverage the capabilities of Node.js to design real-time apps that can support large volumes of messages or chat rooms with ease. You can easily build real-time alert systems, that can offer excellent performance and speed to the end users.

A video streaming application requires sending a large volume of data in “streams”. With the help of Node.js, you can develop such audio or video applications, that can stream both writing and reading data streams simultaneously. Node.js is used by the major streaming application Netflix, which offers services to millions of users in real-time.

Node.js is considered the most preferred option to develop IoT programming projects. It is a strong and quick language that can easily handle massive data flows at any point in time.

This capability of Node.js allows it to connect with the IoT protocols and offers seamless services to the end user. It comes with the NPM, which contains various IoT modules that support the implementation of complex IoT projects.

As we know Node.js supports the processing of real-time flows, which makes it the most suitable option to develop enterprise-level project management and collaboration tools. You can leverage the non-blocking and event-driven methodology of Node.js to build an application like Trello.

Node.js works perfectly for programs that need instantaneous changes and updates, which makes it a perfect option to develop online documentation sites and collaboration programs.

Node.js has been playing a maverick role in the development of high-performing and scalable web apps. It offers a perfect blend of performance, capabilities, features, speed, and power to become a defacto use case for web application development in 2022.

If your application doesn’t need CPU-intensive and complex tasks, then you can certainly use Node.js and avail of its numerous advantages that we have covered in this blog.

We hope this blog will help you make the right decision while building a scaled enterprise application. If you are still uncertain about the capabilities of Node.js, then feel free to contact our Node.js experts.

Arka Software is a renowned web application development company, with a decade-long industry experience in developing successful web applications with Node.js. We would be happy to offer you a free-of-cost consultation and Node.js development services for your projects.