Flutter vs React Native – Which One is Better in 2023?

Digital Transformation has been exponentially rising due to the emergence of mobile app development. All your desired products and services are entailed within a single mobile app, and they are simply one click away from you.

Both Flutter and React Native are renowned cross-platform app development technologies, and both have garnered massive popularity and acceptance in such a short span.

Flutter and React Native enables you to use a single code base for applications that can function on multiple platforms, such as iOS and Android. This has helped organizations to develop applications quickly with less coding and at a considerably lower budget.

Let’s cover a basic introduction to Flutter and React Native.

It is an open-source technology framework developed and introduced by Google in December 2018.  It can be used to build native applications for both iOS and Android platforms. Flutter offers an exceptional combination of high performance and ease of development while preserving visual uniformity.

Dart is the standard programming language for Flutter, which was intended to replace JavaScript. Since Flutter supports the development of cross-platform apps using a single codebase, it allows developers to build applications for web, mobile, and desktop using a single toolset.

Flutter is highly popular among developer communities and enterprises because Flutter apps are easy to navigate and intuitive. How does Flutter work?

The Flutter framework consists of a flutter engine, widgets, and a foundation library. Flutter uses a declarative UI writing approach, where developers need to initiate from the end.

That means, developers must envision the UI before initiating the Flutter app development work, and then they must develop the user interface by using a combination of numerous available widgets. Pros and Cons of Flutter

Flutter allows the developers to see implemented code changes in real time. It eventually saves time and effort which improves productivity and efficiency. It also allows developers to break off the code execution, make necessary changes and continue programming from the same instance.

Flutter offers a wide range of ready-made and highly customizable widgets to accomplish a variety of functions. These widgets are based on google architecture; hence they offer better performance and code quality in comparison to other open-source frameworks.

Flutter allows developers to write the code using Dart programming language, which is directly compiled into the ARM code of mobile devices accelerating the application launch and improving their performance. Flutter eases the pressure on developers via its native codebase and 3rd party integration capabilities.

The primary objective of Flutter was to offer a platform to develop bespoke apps with ease. However, Flutter offers you the ability to develop a captivating and immersive user interface, which enables you to offer a pleasant experience to your users.

Flutter applications usually have large file sizes. Mobile devices have space constraints and with every increasing app size and user data, they may run out of space. This is where Flutter apps lack and result in a lack of performance and storage space.

3rd party libraries allow developers to integrate additional features and functionalities that are open-source, freely available, and pre-tested. As Flutter is a comparatively new platform in the market, it offers limited options for 3rd party libraries and packages.

Although, Dart is an easier programming language to learn, it does need developers to gather adequate expertise in DART first. This needs additional efforts of learning, which may increase the cost and time for any mobile app development.

When to use Flutter?

What is React Native?

React Native Framework is an open-source project developed and launched by Facebook in 2015. In such a short span, it has become one of the most popular mobile app development solutions in the tech world.

Since the developers need to code just once, it allows them to develop apps quickly with fewer resources. How does React Native work?

React native is a perfect blend of JXL and JavaScript. This app development framework offers the exceptional capability to communicate with both native app threads and JavaScript-based threads.

React Native runs on the native components and views, instead of rendering web views on its code. It ensures bi-directional communication by bridging between native and JavaScript threads. Read Also: React vs React Native: Which One to Choose?

Pros and Cons of React Native 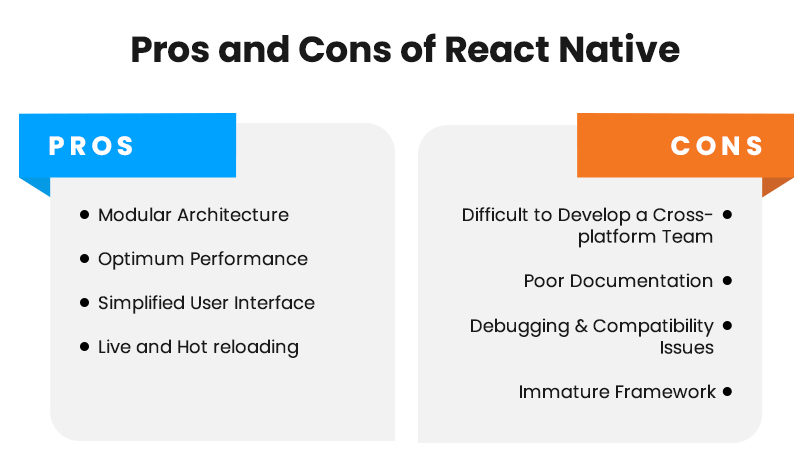 React Native is built upon a modular architecture and imbibes a seamless design language, which allows developers to update or upgrade the apps almost instantly. It also allows developers to rebuild or update existing projects and enables testers to build adequate test scenarios in no time.

React Native works together with Android and native iOS components to produce native API codes that are autonomous of any type of interference. It uses distinct threads from UIs and native APIs, which results in enhanced app performance.

React native offers an extremely simple and uncomplicated user interface to the developers. It uses an open-source architecture, that enables developers to keep the UI/UX as a focal point. Applications built with React Native have a more responsive and seamless user interface, which takes applications way less time to load.

The feature enables developers to make changes and view them in real time without recompiling the application. This feature allows development teams to build applications quickly and result in less time to market.

Difficult to develop a cross-platform team:

As React Native is a cross-platform technology, the development team must be well versed with both native technologies (UX/CI technologies) and www technologies (React and Java). Most of the time it is cumbersome to develop a capable team that can cater to the challenges that may arise while developing cross-platform apps.

React Native is still in the beta phase even so many years after its launch. It has been developed using C/C++, Java, and JavaScript but developers still face debugging and compatibility issues. Although you can overcome such issues by integrating Flipper, which provides a wide range of debugging tools.

React Native has witnessed numerous continuous advancements in recent times, which makes it tough for developers to adapt and adjust to the changes. React Native has indeed lost its credibility in the aspiration to become the fastest app development framework.

When to use React Native?

Here we have some quick facts about both platforms before diving deep into other important aspects:

Flutter vs React Native is a long-going battle, which is likely to last for many years to come. at least several years to come. As an app developer or an entrepreneur, it is very much normal to be in a dilemma while selecting either Flutter or React Native for your mobile application development requirements.

Both React Native and Flutter have emerged as the most popular and widely used cross-platform app development frameworks in the world.

Even though both frameworks are new if we compare them with their contemporaries, developers and app owners are receiving them with open arms.

At the same time, we can witness an ongoing battle between both frameworks, as both have proved their worth and utility in the market. In this blog, we have solely focused on various aspects of Flutter and React Native such as features, use cases, and pros and cons to name a few.

These facts will certainly help you to determine the best framework for you, which can help you avail of the intended business value.

We would also like to add that Flutter is a new kid on the block. However, Facebook is putting strenuous efforts to improve the capabilities and agility of its cross-platform development framework.

Hence, we can say that we may have to wait for a few more years to conclude which app development framework wins the discussion of React Native vs Flutter.

Flutter vs React Native is a long going debate in the tech world. As we are at the onset of 2023, it is important to understand which app development framework can help you fulfill your business-specific requirements.

Although, the use cases of both Flutter and React Native is more or less the same, we do have numerous factors which can influence your decision while selecting a specific app development framework.

For instance, if you are planning to build complex mobile apps with numerous features and capabilities, then you must not look further than React Native.

On the other hand, if you are planning to develop cross-platform mobile apps rapidly, which can offer a native-like experience, then Flutter must be your ideal contender for app development requirements.

If you are still in the dilemma, then please feel free to get in touch with our seasoned software consultants for any advice. We are a renowned mobile app development company with more than a decade long industry experience. We can certainly help you shape your unique app idea into a promising reality.