Swift vs React Native: Which one to use for iOS App Development?

Are you planning to build a native iOS or cross-platform application for your business? Are you in dilemma to select either Swift or React Native to give a distinct look and feel to your app?

Well, you may think that choosing a technology stack for iOS app development might be a simple task. However, building a native app isn’t the best option always.

What if your business requires a cross-platform solution to address the ever-increasing needs of its customers? What if your find React Native more cost-effective and faster than Swift?

You may encounter such questions while planning to develop an iOS app using both Swift and React Native. In this blog, we will provide you with a comprehensive comparison of both platforms, which will help you select the suitable one for your iOS app development requirements.

But, before going any further, let’s have a look at some key statistics about iPhone and iOS.

The iPhone has gained unprecedented popularity since its launch in 2007. It is not just a product, but more of a cultural and social phenomenon. iOS-powered iPhone has positioned itself as a premium brand, which people like to flaunt.

Here are a few exciting statistics about iPhones and iOS:

Going by the above-mentioned statistics, there is no doubt that Apple holds a powerful position to impose a dedicated programming language and mobile app development framework such as Swift.

In July 2010, a group of Apple engineers led by Chris Lattner and the open-source community founded Swift. It was available to install on the Linux platform and was designed primarily for iOS devices. It is an interactive, safe, and concise programming language.

It offers an immaculate user experience and unmatched app performance, which led to its unprecedented popularity. Various renowned technology firms such as LinkedIn, Slack, Firefox, WordPress, and Lyft use Swift for iOS mobile application development purposes. Here we have listed the most common use cases of React Native. 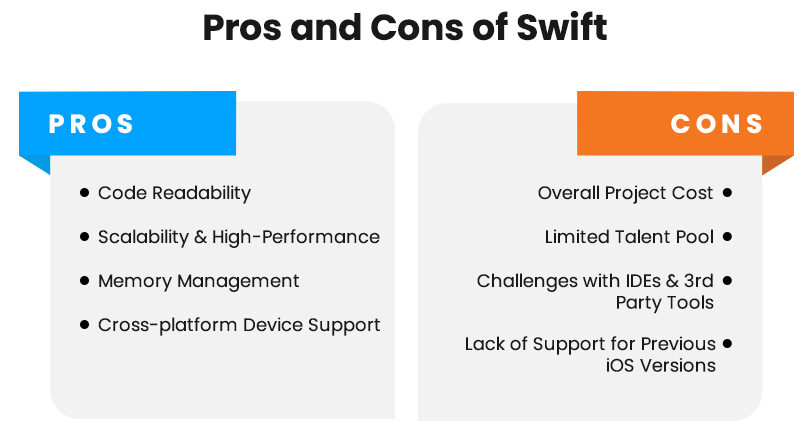 Swift uses a very simple and easy-to-use syntax that makes it easy for developers to read and write the code. Additionally, it makes the developers write minimal code and maintain it without putting much effort.

Swift offers adequate flexibility with functions that helps developers scale the projects without any hassles. It uses LLVM compiler technology that converts the Swift code into improved native code, which results in high-performance mobile applications.

Swift comes with a unique memory management mechanism. Its ARC (Automatic Reference Counting) utilizes a garbage collector function, which fetches and mitigates the redundant instances. This creates more space for the app to function at its full potential.

Swift offers both front-end and back-end support. It allows developers to share the code and reuse them seamlessly. It reduces the overall app development efforts and accelerates the app development process.

Due to the lack of Swift developers in the market, the cost of project development is slightly higher. If you are opting for Swift, then you may have to hire a fresh app development team for your project.

It is very difficult to find seasoned Swift developers. As per the Stack Overflow 2021 developer survey, only 5.1 percent of developers were having expertise in Swift, and that led to a severe challenge when looking for an experienced developer.

The Xcode is an official IDE for Swift, but it lacks support for 3rd party tools for the developers. Swift also undergoes frequent updates; thus it is slightly difficult to find the right set of development tools.

Swift lacks support for the previous iOS version. Although, Apple keeps on updating the operating system, at the same time it is hard to find a developer who can work with iOS 7 and earlier versions.

Choose Swift if you want to

Meta Inc., which was previously known as Facebook, conceived, and developed React Native in 2015. It is an open-source framework, which is suitable for building native Android, iOS, and Windows applications without negotiating on performance and user experience.

The native applications use a different set of languages, tools, and frameworks for different platforms. React Native enables developers to share the code across multiple platforms, which decreases the overall cost and effort to build mobile applications. Several popular applications such as Skype, Instagram, Discord, Bloomberg, and Pinterest have been developed using React Native.

Here we have listed the most common use cases of React Native.

It is one of the most popular frameworks used for the development of cross-platform mobile apps. It is a high-performance framework that offers various features and unprecedented scalability.

React Native allows developers to reuse the existing code, which ensures they remain focussed on the platform-specific changes. React Native’s code reusability is applicable for both web and mobile app development.

The app development turnaround time with React Native is way lesser than its contemporaries. Developers need to write almost 70 percent less code, which enables developers to build apps quickly while not compromising on performance.

With React Native, you can easily develop a single application for multiple platforms. It reduces the overall app development cost.

Usually, the native applications built with React Native experience challenges with debugging. However, the developers can overcome this with the usage of 3rd party debugging tools.

React Native is a newer framework and it is still undergoing lots of improvements. Developers experience lots of challenges while maintaining their apps for the long term with frequent updates on the framework.

It is an open-source framework and a JavaScript-based library, which led to various application security issues. React Native uses Async Storage, which takes an unencrypted approach, it makes app data vulnerable and could be accessed by attackers.

If you are planning to develop an application with transitions and animations, then React Native is not a suitable option. React Native is preferred for agile delivery and lean development.

Choose React Native if you want to

In this section, we will offer you a comprehensive comparison of both Swift and React Native based on various vital parameters.

React Native enables developers to build a captivating native-like user interface, but it lacks Swift’s level of performance and stability. While with Swift you can easily leverage the capabilities of mobile devices and native language to build a feature-rich and stable application.

Swift gets an upper hand here due to its native development approach, as it consistently outclasses cross-platform development. Swift is way ahead of React Native on this front, especially while building graphic-rich and dynamic applications.

Although it’s slightly difficult to compare the two as Swift is a language and React Native is a framework, it’s quite visible that React Native scores higher based on community support and developer pool.

On the other hand, Swift has gained immense popularity in recent times due to the unprecedented popularity of iPhones, but it still lacks an adequate talent pool.

If you are developing solely an iOS application, then Swift is your best bet without any doubt. While React Native could be your perfect solution if you are planning to develop a solution for both Android and iOS. Both offers rapid app development, though React Native scores slightly higher on this parameter.

React Native allows you to make minor updates and changes submitting any additional information to the App Store.  You can use the framework CodePush, which enables app owners to update the JavaScript code. You can also use the Electrode to perform minor changes over the air.

On the other hand, Apple doesn’t support pushing OTA updates to the application. The app developers need to build a fresh version of the application and submit it to the App Store to push any sort of updates.

Unfortunately, React Native doesn’t provide an out-of-the-box tool for CI/CD. If you want to automate your integration and deliveries, then you must opt for the 3rd party solutions. You can create your delivery pipeline using Fastlane, Bitrise, CircleCI, and NeverCode.

On the other hand, Swift allows you to use tools such as Bitrise, Buddybuild, TravisCI, and CircleCI to build CI/CD pipeline. Here Swift scores slightly higher than React Native.

With React Native, you are more exposed to security threats. Here you can store the app and user data with AsyncStorage API, this you must implement an abstraction on top of it, as AsyncStorage operates globally, and it is unencrypted. The developers and app owners have to utilize 3rd party tools to secure their data in React Native application.

On the other hand, Swift assures better encryption and security setup to ensure a higher level of security for the app and user data.

React Native enjoys the support of wider community support and it is reflected in the availability of a wide number of 3rd party libraries and APIS for the developers.

They can avail these libraries and APIs to incorporate additional functionalities to their applications while improving communication with the native components.

On the other hand, Swift does offer numerous APIs and iOS open-source libraries. It also enables seamless 3rd party management and maintenance, but it will still take some time to catch up with React Native.

Read Also: React vs React Native: Which One to Choose?

Whereas Swift was developed specifically for the iOS ecosystem, it has been programmed in such a way that developers can leverage its UI elements to build the highest quality user interface for iOS devices.

React Native encounters issues with 3rd party library compatibility and code updates. Whenever a new version of React Native framework is released, the developers need to check if the fresh version is compatible with the 3rd party libraries of your application. Hence, it is a cumbersome task for app owners to maintain their apps with React Native.

Whereas Swift is a statically-typed language, which makes it easy to maintain the iOS application than the React Native apps. Here the developers can depend on Xcode to manage error tracking, which mitigates lots of maintenance-specific challenges for developers.

If you are planning to develop scaled enterprise-grade applications, then React Native is not a suitable option for you, as it uses JavaScript, which is an untyped programming language. While scaling the application, you may reach a juncture where you might face roadblocks due to lack of type safety.

On the contrary, Swift uses a concise syntax, which is suitable for building enterprise-grade applications. It allows you to write minimal code, which is easier to manage and allows developers to scale the app when a requirement arises.

On the other hand, Swift supports end-to-end modularity to ensure the flexibility and scalability of applications. It allows a single code distribution of an app to communicate with other modules. This mechanism ensures less coding, better code maintenance, and easier reuse of code.

Well, this is an important parameter for anyone. In the USA, you may have to spend $60-80K per year or $61.54 per hour to hire a React Native developer. To develop a React Native application, you will need about 7-10 developers.

Well, we have provided you with a comprehensive comparison between Swift and React Native, covering all the vital aspects as well. However, we would like to add that your decision may depend on the project requirement, budgetary constraints, and application features to name a few.

If you are a start-up aiming to acquire more users and scale soon, then React Native is suitable for you. You may opt for Swift if you are planning to continuously upgrade the UI/UX and manage memory footprints effectively.

No matter which framework, tool, or programming language you choose, you could not build a successful mobile application without a team of seasoned mobile app developers. And this is where Arka Softwares can help you.

We are an experienced mobile app development company, with a decade-long industry experience. Our Swift and React Native experts can certainly transform your unique business idea into a successful mobile all in just a matter of days.